Exposed bellies,spitting and other very “different” manners in China, why does it seem to be secret knowledge?

On this journey I went to China, admittedly I didnt read guidebooks and tried to stay free of ” preconceptions” – but I read  when I arrived there after a few days trying to find answers.

Most countries have their tales, stereotypes told by other who visited and become somehow common knoweldge.

I have become I think fairly blasé with all my travels on 34 and beyond – and in general it takes a lot to shake me. China really took me out of my comfort zone. It was a tough trip.

Tough on so many levels. Physical and mental. It was very hard to keep levelled and not fall into a judgmental attitude.Something I had to fight often and didnt always succeed in doing.I was often getting irritated as opposed to distance myself from it all. The exhaustion and heat probably played a part in it.

First the pollution.I had heard of that one, but I didn’t expect the scale of it. The heat exacerbated the pollution I suppose, and I was finding it hard to breath and function.I thought when I will leave the big city it will get better – I felt it became worse! I may be more sensitive to it being a sports person  and health professional but I am sure anyone would feel it to some degree.

The beautiful landscapes of the chinese paintings? I didnt see anything  that wasn’t spoilt by concrete , building site, factories, fume spitting chimneys. And I have tried hard to find beauty!  That’s the easy part.

Then there is this what some books call the cultural differences….I am not sure if some ” cultural” habits should really be nurtured.

Men in the heat walking about with their bellies exposed – and not exactly topless : the Tshirt is just pulled up to the neck.Somehow there is a difference between completely topless and Tshirt just pulled up. Aesthetically speaking… 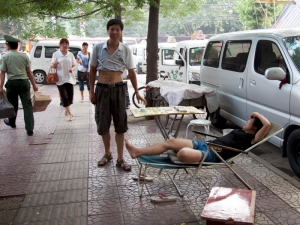 Then comes this constant background sound Aahhghhhhh tfff.as they work up the phlegm from deeply in their lungs and spit it on the floor, any florr, all floors: pavement, street, supermarket, restaurant, your feet. Men and women do it.Even a lady you think looks absolutely charming and beautiful, can turn into a toad when spitting or burping like one. This ” tradition “of spitting, stems out of Traditional Chinese Medicine. The idea being that phlegm is a manifestation of the illness inside you, so it must come out.

Now – where I come from we are also plagued by the men pissing on the side road – without hiding, or facing walls. Some even stop by the side road on morotways and releive themselves next to the car.

In China I was sadly reminded by this and by this awful smell exacerbated in summer by  the heat of wee in side walks. Yet I was not prepared for the sight of children weeing and pooing under the parents supervision wherever they felt like it – be it street, park, ancient ruins, tourist spots and I heard also supermarkets! from toddlers to older 7-8 years old. Speechless.  I researched a little and from what I understood , some Chinese people believe “a child urine is pure”… 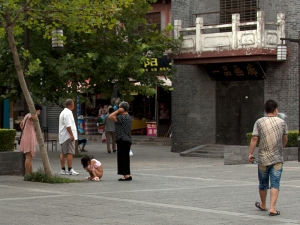 right there – leading to the Longmen Grottoes. It was left there .

This is also something I wasnt expecting in such a fashion and so often.It only  takes to challenge the culprit for him to quickly backtrack. Chinese people hate confrontation.

Once again I had a feeling of deja vu – something  that annoys me sometimes when I go to Morocco, people have a tendency to talk loudly when they get passionate or upset about something. Here however its shouting when talking full stop. It doesnt mean they are upset, but the decibels can be VERY high at times. The way they address you is very abrupt and straight o the point – no excuse me etc…I first thought it may be a language issue , but I am not so sure.I also learnt that in China its not a problem to point the finger or to laugh at someone, or tell them they are fat or something.Its a statement.

There is also a huge difference in treatement if one is a stranger or part of a inner circle ( andthere are many inner cicrles). If there is any kind of relationship – or likeness, then courtesy goes up.If not , none.I wonder if that has to do with  the sheer amount of people living close to each other.

It was all very tiring.

I am not one to focus on the  negatives, yet in China I felt exhausted by some incessant poking.I felt like a hedgehog – with spikes turned inwards.

I did however find some nice sides of China ….

3 Responses to Exposed bellies,spitting and other very “different” manners in China, why does it seem to be secret knowledge?