I have always been fascinated by the idea that humans have developped complexe languages,sounds that articulate ideas and feelings, along with scripts and symbols to convey, translate those sounds. Humans have been very creative and diverse at this exercise.

During the show at the Cube Independant art space in Rabat, I created a playful piece a game whith 2 dices , each having one of the syllables to make up the word cube. Each cube had different scripts found on Latitude 34, including tifinagh. The  game was to find two syllables of the same script to make the word cube. 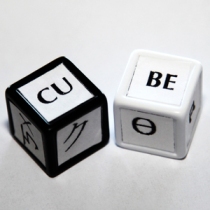 I grew up with 2 languages, Arabic and french, or 3 as there is the spoken dialect and classical arabic taught at school, then went on to learn English, understand some German and bgan to learn Japanese and Mandarin, specifically by interest into totally different systems of writing and speaking therefore thinking.I do believe that by learning a language we have access to the culture, and its way of comprehending, articulating the world around them.

Moroccans are bilangual, at the minimum, most are trilangual or more.

First comes the arabic dialect, french and classical arabic,  sometimes spanish in the north instead of french. Many go on to learn at least basic English and there is a whole section of the population who speaks Tamazigh, Tifinagh or Tachelhit, the language of the indigenous people of Morocco before the Arabic invasions.You’ll find that in the tourism industry, most speak basic german or other useful languages. recently Chinese has made an apparition with very cheap classes available.

Recently there has been a resurgence of pride in cultural identity and those languages have made it back ” overground” after a long spell underground, back to  school, the media etc.

So here is what it looks like ! I fond this very beautiful in its simplicity, it looks very ancient and very close to there arts and crafts.

Neo-Tifinagh alphabet as used in Morocco

All human beings are born free and equal in dignity and rights. They are endowed with reason and conscience and should act towards one another in a spirit of brotherhood.
(Article 1 of the Universal Declaration of Human Rights)