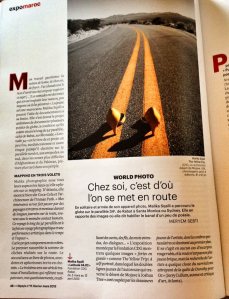 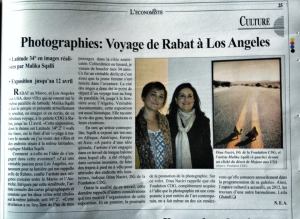 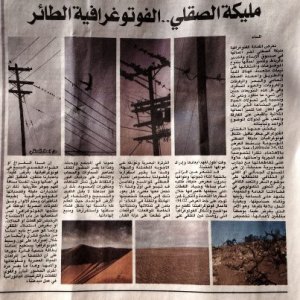 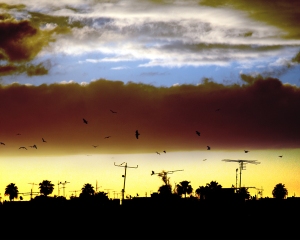 Sometimes dreams come true — or are made to come true. Young and tenacious enough to carry out the enterprise, Moroccan artist Malika Sqalli has set out to document every significant aspect of the lands that lie along the 34th parallel of latitude, on which her home city of Rabat is situated. “Latitude 34,” as her project is titled in the show at Whitespec, incorporates not only the 34th parallel north but the corresponding 34th parallel south.

“Document” is actually too dispassionate a verb; Sqalli embraces the features of the locales that interest her. For the city of Atlanta, that includes Coca-Cola and the architecture of Inman Park. (It was her visit to the intown neighborhood that led to her chance discovery of Whitespace gallery and its Whitespec project room, where her photographs are on view through November 24.)

The exhibition’s two color photocollages titled “Atlanta’s Bubbles” take the shape of a geometric pattern familiar from Moroccan tiles: the central image of an Inman Park mansion is flanked by the Coca-Cola logo, repeated in alphabets ranging from Arabic to Chinese and Korean — a reach even more global than Sqalli’s project.

Except for an inkjet print of the drawing “Imaginary Lines,” symbolizing the lines of latitude that pass through Carolina Beach, North Carolina, and Rabat, Morocco, the remainder of the exhibition consists of landscape photographs — or occasional skyscapes, and one image of the romantic but almost claustrophobically urban old quarter of Fes, another Moroccan city along the 34th parallel.

“Romantic” is a relevant adjective here; even when a photograph is ironic in its details, the portrayal of the scene is passionate and exhilaratingly innocent. There isn’t an ounce of cynicism in the picture of “Mount Huashan,” even though we’re told that the clouds of mist that surround the long line of visitors that snakes around the mountain trail contain more air pollution than water vapor. The closest the show gets to standard-issue irony is the belching smokestacks adjacent to “Huntington Beach,” a stretch of sand that seems far more cramped than we expect California beaches to be.

Likewise, the forest of wires and antennas that sprouts among the occasional treetop in “L’Oiseaux a l’Aube” (a study of birds taking wing at dawn in Rabat) is a sight that enchants Sqalli for its geometric complexity. The cluttered but well-composed sunrise is as pristine here as in the companion photo “The night’s collar opens on the chest of dawn [Arabic poem].” The title says it all.

Although Sqalli’s romanticism occasionally verges on the excessive — the lonely stroller on a South Carolina beach echoed by a lone seagull, or the ocean seen at sunset in Japan — more often the scene she captures has a visual freshness. One example is the gravel track bisecting green fields in “Rawara Beach Road,” a landscape in Northlands, New Zealand, where the chief feature apart from the road, fields and sky is a flock of sheep.

Four triptychs of “Dunes” reveal Sqalli’s fascination with vast drifts of sand, which she finds in places we might not expect: New Zealand and Japan as well as desert regions of Australia, the United States and Morocco.

Her quest will eventually take her to more troubled locations than, say, Malibu (where she took a photograph art-historically titled “Turner in Santa Monica”): the 34th parallel passes through difficult parts of Afghanistan and Pakistan, for example. She is exploring options to make it feasible. 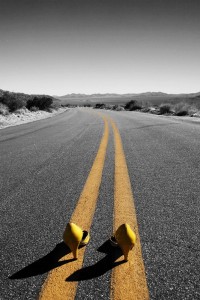 The yellow trip – A self portrait.

On the whole, thus far, the photographer’s travels have had more of the magical aspect suggested by “The Yellow Trip — A Self-Portrait,” in which the double yellow lines of the highway stretching through the Mojave Desert at Joshua Tree are intersected by Sqalli’s yellow shoes, which cast dramatic shadows in the foreground. They are by no means ruby slippers, and the road is scarcely yellow brick, but Sqalli’s search has something of the appealing surreality of Dorothy’s quest for Oz.

This trip, however, confirms Salman Rushdie’s observation about Hollywood’s deformation of L. Frank Baum’s story: in reality, if there is no place like home, it is because the whole world offers far more than home. Home (which in Sqalli’s case is currently London) is where one starts from, as T. S. Eliot wrote in “Four Quartets.” And Sqalli has started most marvelously. 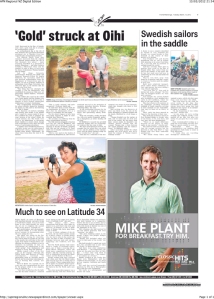